Meet Hussain Manawer, a British poet, writer, and producer born and raised in East London. He’s a globally renowned mental health activist who’s won critical acclaim for his ability to peel back the layers of the stigma that create barriers to mainstream awareness of mental health. In 2017 Hussain partnered with King’s Professor Dame Til Wykes and Hackney Empire to set an entirely new Guinness World Record for the ‘World’s Largest Mental Health lesson’. He received an Honorary Fellowship from King’s for his mental health campaign in 2018.

Earlier this year, Hussain released his debut poetry collection titled: Life Is Sad And Beautiful, and it became an instant Sunday Times Bestseller which was a first for a British Pakistani poet.

His poetry is emotionally charged, lending itself perfectly to this generation’s most critical issues. He’s widely sought-after to articulate the struggle many face in silence. Hussain’s work comes to life in partnerships with everyone from Oprah Winfrey, Prince Harry, Tyson Fury and Marcus Rashford to organisations such as Glastonbury, Apple TV+, Spotify, Burberry, and Global Citizen.

Depression became such a part of my life; it was embedded in me as a person. I felt as if it was written in bold, yet invisible across my face. It sat within the sympathetic eyes that looked at me from the ones who loved me. It hovered around my spirit, shook parts of my soul and dragged me through episodes of my years. But somehow, through poetry, I found a way out. I was able to make sense of it all. The cultural identity crisis, the depth of grief, the power of loss, the effect of mental health and societal stigma, I was able to identify all of life’s most powerful heartbreaks and ‘red flags’ of their relationships and connections with depression. I then hovered over them with a magnifying glass, which in this case was my pen, and began deciphering, analysing, and breaking down every little thing that was affecting me and the way I felt. Now I share all I have found with you…

Check out his book: Life is Sad and Beautiful: https://www.waterstones.com/book/life-is-sad-and-beautiful/hussain-manawer/9781529390186 Hussain has tapped into and channelled a conversation which is not only relevant and timely but also essential, giving it a framing which has the potential to impact people’s awareness and understanding. He’s sweet, disarming and charming, with a unique ability to bring people along on the journey with him (even if they feel uncomfortable with where they have to go). To us, this is a mark of a true cultural leader and brand builder, and for that reason, Hussain’ The original Mummy’s boy’ Manawer, we salute you. 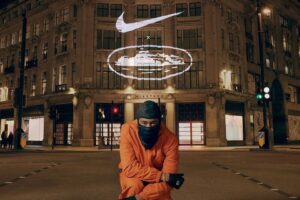 THE FUTURE GOATS OF STREETWEAR